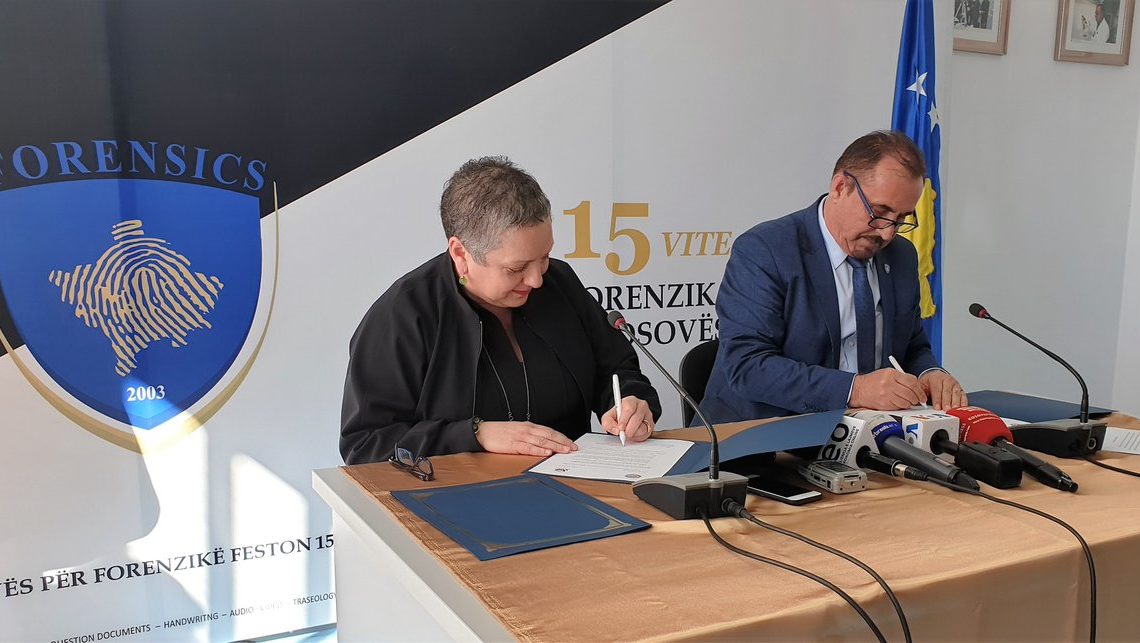 Good afternoon Minister Mustafa, Chief Executive Olluri, members of the press.  It really is a great pleasure for me to be in Kosovo for my very first time, and an even greater pleasure to officially make this donation on behalf of the United States Government, specifically the Department of State’s Bureau of International Narcotics and Law Enforcement Affairs– INL, which is my bureau, and the U.S. Embassy here in Pristina.  I am also happy to belatedly congratulate the Kosovo Forensics Agency on its fifteenth anniversary.

I am here today to announce our donation of Automated Fingerprint Identification Software, or AFIS.  AFIS is a criminal database system that processes, edits, searches, retrieves and stores fingerprint and palm prints to identify the perpetrators of crimes.  AFIS will be used to process information from crime scenes, assist detention centers and border crossings, and coordinate information sharing with international law enforcement bodies such as INTERPOL.  This donation by the United States represents a million dollar investment in Kosovo as a strong law enforcement partner that is strengthening its commitment to rule of law.

INL has assisted the Kosovo Forensics Agency since its opening in 2003 with more than $20 million in equipment, software, and training.  The KFA has taken that investment and used it to benefit law enforcement and the rule of law in this country.  Five of its laboratories are now internationally accredited, and two more are in the process of accreditation.  These are impressive successes, and INL is grateful and happy to have been a part of them.

Our assistance to KFA, however, is only a small share of the assistance we have provided for law enforcement and the justice sector, which has included funding for the Kosovo Police, the Kosovo Academy for Public Safety, the Police Inspectorate of Kosovo, the Kosovo Prosecutorial Council, and the Ministries of Justice and Internal Affairs.  Over the past decade, INL has provided advising and mentoring through our partners at the U.S. Department of Justice.  We’ve constructed communication towers, a data center, and an evidence room for law enforcement.  We’ve also recently installed closed-circuit televisions in Gjilane and will soon finish more than a dozen victims’ interview rooms in police stations and prosecutors’ offices around the country.  And we have begun a large assistance program with the Kosovo Correctional Service to improve capacity in that sector.

The United States makes these investments in Kosovo with the expectation that Kosovo will remain a partner for peace, justice, and prosperity in the region.  We provide law enforcement training and equipment not only for the people of Kosovo, but also for the American people.  Transnational organized crime affects all countries, and when we can facilitate cooperation with and improve the capabilities of other nations, we all benefit.

Kosovo has achieved significant progress in strengthening its rule of law institutions, its legislation, and its judicial efficiency.  But, as I’ve come to understand as I’ve gone through my visit, public trust remains low.  The United States, with its long and significant investments in Kosovo rule of law, hopes to see a visible commitment to ending corruption, starting from the top down. I wanted to underscore the failure to address corruption will ultimately undermine even the best-written laws and the most reformed institutions—and Kosovo’s people deserve better. We will help Kosovo to continue to make that progress and we need serious partners and leadership in the government, judiciary, Assembly, police, and among the population to be successful.